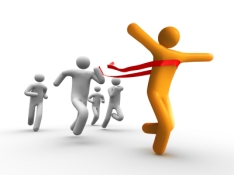 Back in 2010, I had a contest for my online radio show, Coaches’ Corner on BlogTalkRadio, when I was about to reach 10,000 downloads and nearly 50 shows.  At the time, my average listenership was 213, and my biggest show (with the late Naava Piatka) was just over 700, which number was a seemingly impossible number to break.  I took a hiatus for nearly a year while enrolled in classes, then came back better than ever.  Now, approaching 100 shows, I’m about to have my 75,000th download, with half of those coming in the past six months!  (Prior to the night of Hurricane Sandy, I had just hit 40,000.  My show with Peter Shankman of HARO garnered over 800 live listeners and over 10,000 downloads.)  Now, it’s rare for my show not to break 1,000 downloads, and my top ten shows all exceed 2,000!  I’ve opened up the show to many people who touch, move and inspire people to action in their lives, and have had several terrific singer-songwriter musicians.  (And the leadership coach David Brownstein, who bridged both worlds by sharing his original music with my audience.)

To find my show on iTunes, you might use this handy short URL: www.bit.ly/coachescorner, and you’ll be taken right to the page.

To celebrate my imminent 75,000th download, I also have a contest going. The first person to write to me (at coach @ andrewporetz.com) and say “I’m your 75,000th listener” (along with the guidelines below) will win a full three-month telephone coaching package and assessment valued at up to $1,497!

Qualified entries only!  To win, follow me on Twitter (www.twitter.com/coachandrew) and check for my announcement that I’ve surpassed 75,000 listeners, then send an e-mail with the subject line “Put me in, Coach!” In the body, tell me that you believe you’re the 75,000th listener, and tell me the name of my guest and a short description of the show you listened to.  Most importantly, tell me something you learned from listening to the show.

The clock starts the moment my show reaches 75,000 listens (as of April 10th I’m at 73,653, so it can happen in the next day or so) and ends when I have my first three winners, though any qualified entry before Memorial Day will qualify for the free coaching session and discount.  Good luck!